1
View basket “Giant Pucket” has been added to your basket.
Sale!

Finger Flicking Fun for Nearly Everyone!

Pucket is a frantic dexterity game. Players race each other to catapult the pucks from their side of the board through a small hole leading to the other side. There are no turns, and any pucks that arrive on your side must be sent back before you win. Pucket games are hand-crafted in India from sheesham wood. 54 x 40cm.

To add a personalised engraved message on your game, click here. 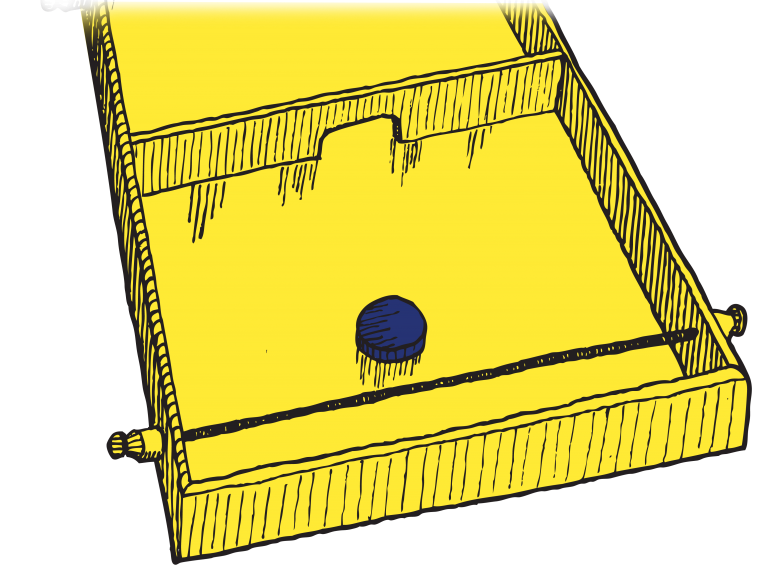 Pucket is our own version of a traditional French game. French artisans would make the game from wood and use cat gut for the elastic, which had to be kept moist during game play to stop it turning limp. The game is still played in France by traditional games enthusiasts.

After seeing two jolly old men playing Pucket on the street in a southern French town, we went straight to the DIY shop for materials to build one. A couple of years later, having refined the game and our technique, we felt it was too much fun to be kept to ourselves, and no one in Britain seemed to have heard of it.

The final inspiration was reading Jeremy Piercy’s book Coffins, Cats, and Fair Trade…Toys, which describes the glut of skilled woodworking craftsmen and women in north India, now that the household goods that they used to craft are often imported and made from plastic. We were able to get our Pucket games made by some of these artisans, with the assurance that they are receiving a fair wage for their work. We make an annual trip to visit our suppliers and visit the craftsmen to see them at work -have a look on our Fair Trade page for more info on this as well as the report on our latest visit. 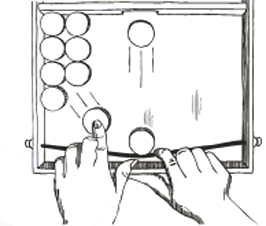 One hand pulls back the elastic as the other hand places a puck in front of it. Be sure to let go of the puck before letting go of the elastic. Once in a while you’ll find all the pucks are on the wrong side, and so you’ll need to sweep them over with a broad movement of your arm (this move is known as the “type writer”). 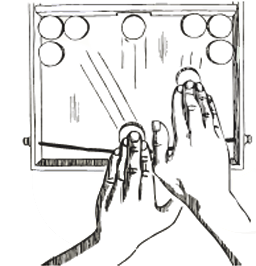 Drag a puck back against the elastic and let go, first with one hand and then the other. This produces the highest firing rate but only Mr Garner himself can combine it with good accuracy. 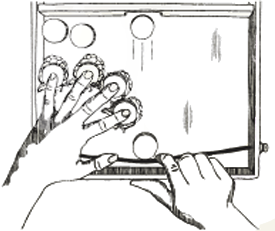 Much like the harpist but each finger on your loading hand is primed ready with a puck to re-load as soon as one is fired. This is difficult to master but can greatly increase firing rate if done well.

When a too well-aimed puck bounces off the opposite elastic and comes back through the gate. This often happens when you’re about to win – but remember you can’t win on a cardinal – your last puck has to go through the gate and stay there.

When a poorly aimed puck becomes lodged in the gate. Feed your opponent the dinner by knocking it through with another puck, which will likely become the next dinner, and with luck the start of an eternal feeding session…

Players fire at the same time, causing the pucks to “kiss” at the gate and rebound. Get the next shot in quickly otherwise you’ll kiss again.

When a puck flies over the gate. The sender must take it back. If your opponent “forgets” to take back one of their offending pucks, the best moment to remind them is when you only have one puck left. 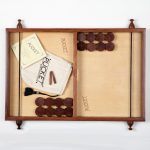 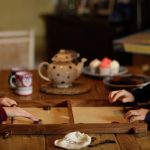 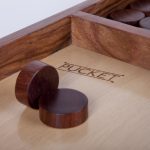 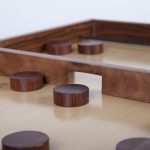 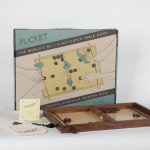