Things we wish someone had told us about Kickstarter, and a big thankyou to our backers.

In September of this year we completed a successful Kickstarter campaign to launch the luxury version of our game Rollet. It was our second attempt – the first attempt a month earlier failed to reach goal. There’s plenty of information on the web about how to run a good KS campaign, and we won’t repeat it here. Rather, I’m going to set out the choice nuggets that we wish somebody had told us.

For the uninitiated, Kickstarter is a web platform for funding projects (typically new products or artistic works) which require a certain scale to succeed. “Backers” pledge to contribute to the cost of the project, in exchange for receiving a “reward” – typically an example of the product or artistic work being made. From the maker’s perspective, KS provides finance and sales in one hit – a very attractive package. Projects that do not reach the pre-determined funding goal do not receive any funding – the pledged contributions are returned to the backers.

Without further ado, here are our three wise Kickstarter sayings we wish somebody had said to us:

1. Get your PR ducks in a row before you start.
2. Set your funding goal as you can tolerate.
3. Check and re-check the reward descriptions and pricing before you go live!

The main reason our first campaign failed whilst our second attempt worked is that I started trying to get coverage from games reviewers after starting the campaign, and by the time most of the reviewers responded the campaign was over, and the second attempt had begun. Moral of the story: contact bloggers and journalists a month or two before your campaign goes live! Then link to your glowing coverage in the blurb of your campaign page.

Our first attempted KS campaign had a funding goal which we would have pleased to achieve. The second attempt had a funding goal that was boringly low – just enough to break even. That’s where you want the goal to be, as then you smash your goal early on in the campaign, and more followers are attracted by your astonishing success.

In our excitement to launch we made some pricing errors on our rewards – once backers have pledged for a reward, the Kickstarter platform does not let you make any changes. So don’t be like us – make sure you get it right first time!

We were very humbled by the degree of support we received from the Kickstarter community, much of it from people who were not rewarded in any way. A grateful shout out goes to:

You’ve all contributed in different but significant ways. Thanks a lot! 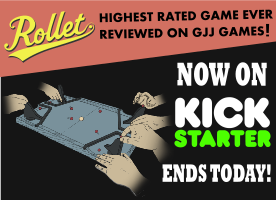 Covid response from our supplier

FOOD DONATIONS FOR ARTISANS DURING COVID-19 Whilst it’s difficult to overstate the impact that the Covid-19 pandemic has had in this country, the effects on the lives of some of the 800 artisans working for our supplier, Asha Handicrafts, in India could have been catastrophic. We are proud to have…

Rollet and Pucket chamionship at the Loading Bar, Dalston

Come along to the Pucket and Rollet championship at the Loading Bar, Dalston; 8pm on Tuesday 13th August. A new Pucket and a new Rollet game will be up for grabs to the winner of each competition, along with a hand made wooden medal. This event is organised in partnership…